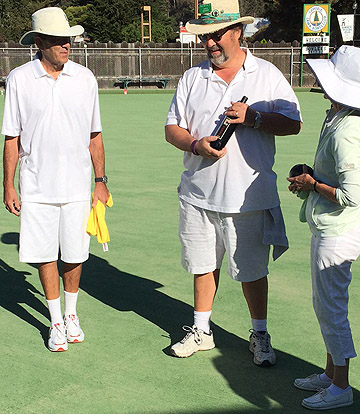 In lovely weather, and after lots of practice and a social game on Saturday, reality set in for the tournament Sunday.  But it didn’t start that way. After the first round of games the score was tied. In fact, two of the six games had tied scores.

Since we had quite a few extra players compared to our hosts, we then did some rotating of our teams and positions. Guess we brought on the “B” teams because then we got beat up badly on some games and lost most of the others. Oh well, that is why there is no trophy picture here.

But do see the whole traveling team before the game, and Craig getting sincere advice from Dennis on Tracy on what to do with the bottle of wine he won in the pre-match spider. 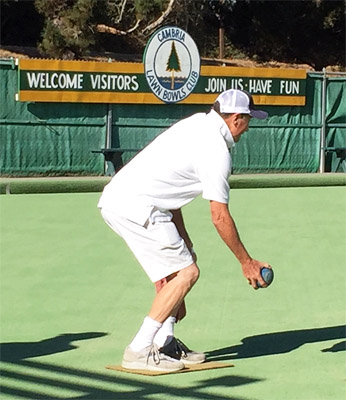 A Cambrian bowler shows us how to do it. Look how far right his feet are aiming prior to the shot!

Posts related to Cambria takes charge in 2nd round - Oct 2016

Fresno runs off with the trophy at home this year