The game of lawn bowls is very simple to learn but can take years to perfect. Games are played in a gentlemanly fashion, with positive support and comments for all players. The goal of the game is to get more of your team’s bowls closer to the jack (the small white ball) than your opponents on each “end” played. A typical game is 14 or more ends, with an overall running tally being kept at all times to establish the winner. 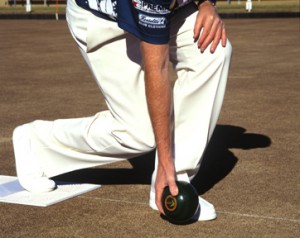 Bowling bowls come in sets of 4, the maximum number of bowls you will roll in one end of a game. (Only 3 bowls each are used in triples and 2 in Rinks – as quadruples is known). The big surprise of the game is when you first pick up a bowl, and feel how heavy it is. Notice that all bowls come in sets with different pictures on each set to identify who the owner is – which is very important when you come to scoring.

But the bigger surprise is when you try to roll it and see it doesn’t go straight! Wow. These bowls are not round. They are weighted to one side and have a built in natural bias. So you always roll the bowl on its smooth areas (areas without emblems or markings), with the small emblem on the side to which you want it to curve. How much it will actually turn is a factor of how fast you roll it (know as “the weight”), where you aim it (known as “the grass”), the condition of the green, and other bumps of nature. But you always try to release the bowl smoothly aiming at a distinct point that you hope will bring the bowl to rest at its best target position.

While the whole bowling green is square, games are actually played in assigned lanes (known as rinks) which are designated with small markers on the edge. These also act as great reference points for aiming when you roll. To protect the grass, different rinks and different directions are used on different occasions.

There are both forehand shots and backhand shots, and you will need to learn both. But don’t forget to check your emblems…to avoid the embarrassment of a reverse bias shot when your bowl will surely take off into a neighboring rink.

In singles play, it is just you against an opponent (with a neutral spotter to help center the jack). In team play, the following positions exist:

Lead: The person who leads off
Vice: The next person to play, and the Vice Skipper of the Team
Skip: The Skipper. Always plays last. Usually the most experienced player who also guides most of the strategy.

The skipper of whichever team “has the mat” waits at the far end, then the Lead player, physically places the mat and has their Lead player role the jack to establish its position for that end. The Skip aligns it on a center line, with hand guidance signals from the Lead. After that, teams alternate who rolls their bowls, starting with Leads, then Vice. Once these players have all rolled, they change ends with the Skips who in turn try to improve on their respective team’s scoring positions. You are allowed to roll your bowls however you wish, provided you have at least one foot over the mat on release. Most will find that the smoother the roll the better. So watch the experienced players and see how smooth and consistent their releases are, even if they can’t get low down to the ground.

If one bowl gets a bounce off another player’s bowl, it is known as a Wick. Hence the name of our monthly newsletter. Skips often get good at promoting their team’s bowls to better positions around the jack.

SCORING: When all have finished rolling, the Vice’s are in charge of agreeing on the score. The bowl closest to the jack scores one point. Subsequent bowls, of the same team, that are closer to the jack than any of their opponents continue to count one point. As soon as an opponent’s bowl is the next closest to the jack, scoring stops for that end. The losing Vice or Skip puts the score up on the blackboard or scorecard, while the losing Lead rakes the bowls back. Simultaneously, the winning team’s Lead places the mat and prepares to roll the jack for the next end.

Each game is played to a pre-determined number of ends (common for pairs, triples, fours) or a pre-determined number of points (usually in singles). Often this only 12 or 14 end for social bowlers or early rounds in a tournament, but 18 ends in a serious competition. For singles, a tournament will often be first to 18 points total, and to 21 points in the final games.

NOTE: This is but a brief summary….but all you need to get started. A quick scan of the internet, Facebook and YouTube will teach you a lot more – of course, most of us just learn at a day on the green. And the most valuable lessons come from joining games. While lawn bowling can be fun, it’s no walk in the park. The important thing is to keep on trying to develop your game, and of course to have fun while you’re at it!

Download The Basics of Bowling. One PDF page with diagram.